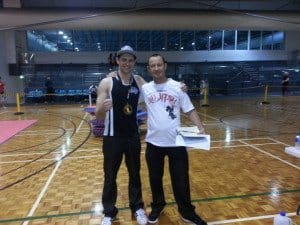 Myself with Coach Anthony Lange after I won a gold medal.

Last Update March 27th, 2016 I have been training at LangesMMA for over five years now and have found it to be one of the best and most positive decisions I have ever made. At the time I looked around at various gyms on the Northern Beaches and the choice to train at Langes MMA was a very simple one to make. No other gym had the depth of experience and training options that are offered by Anthony Lange. Anthony has had real MMA and BJJ competition experience something that was surprisingly apparently lacking from all the other clubs.

It was also the longest running MMA School in Sydney and during that time Anthony had coached many people to martial arts success produced champions and black belts. It was easy to be confident that I was making the right choice to start there and after training for many years under Anthony Lange’s guidance, I was able to win 3 x Australian MMA Championship titles and many Gold medals at BJJ tournaments.

But even more importantly I have made lifelong friends with many active individuals that I have met through the club. I look forward to continuing to train there for many years to come and recommend Anthony Lange and Lange MMA to anyone on the Northern Beaches who is looking to start their journey into the world of Mixed Martial Arts!