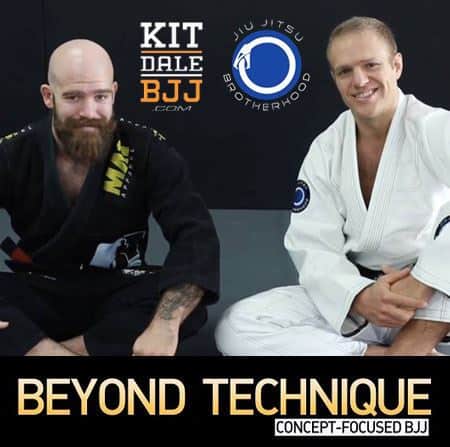 Beyond technique is a DVD of 20 BJJ concepts which can be summarized as follows :

Transitional Pressure
When moving between positions, (sidemount, knee ride, north south, mount ) you want to maintain the pressure on your opponent at all times.At no point do you want to take the preassure off.  Constant pressure and control.

Like lifting your fishing rod up in the air before you begin to wind the reel to help land the fish.
If you are in someones guard and they have grips on your sleeve stand up and posture with your legs and hips and then recover control of your sleeves by bringing them closer to your body. The opposite would be just trying to pull your arms in on their own.

Instead let your legs, hips and posture be the fishing rod lifting up and then pull your arms in

“A four legged table is a stable base, a two legged table falls of its own accord”
Consider an opponent on their hands and feet with each limb representing a table leg. Then Divide the body into 4 quadrants. With one quadrant representing the left leg, right leg, left arm and right arm.
To plan your sweeps you want to look at what quadrant of your opponent you have neutralised and that is the area  and direction that they can be swept into.

Three principles used for sweeps. Either do all three or two really well for a sweep to work. Taking away the ability to post is the same as the quadrant concept .You then want to get a grip to take away the opponents posture. Once you have taken away their post and posture you need to create a leverage point on there body by getting a grip or using your foot and then sweep into the quadrant that you have taken away the post from.

For competition Jiu Jitsu against guard pullers. TO pull guard the opponent’s hips must come closer than their shoulders. To nullify this look to grab their lapel on their shoulder and break them forward so that their shoulder will always be closer to you than their hips.
If they pop back after you have broken their posture forward the will be susceptible to leg sweeps / trip takedowns.

Deals with how you push and pull with your arms. Do not push straight out , it is a more efficient movement to rotate your arm when you push out, similar to throwing a punch.

When pulling it is the same concept but in reverse, so when you pull in you will rotate your arm.For example if your palm was facing down when you grabbed your opponent you will rotate your arm so that once you finish pulling in your palm will face up . Essentially pulling and pushing as if you were throwing punches and rolling your knuckles over.

When guard passing you must always control your balance, base, center of gravity or else you will be easy to sweep.

Changing your center of gravity to the opposite of where your opponent is looking to sweep you will make it difficult for them. This will usually be controlled by moving your hips.

If they have taken a post away then you can use the quadrant concept in reverse by shifting your weight and center of gravity to the opposite quadrant from your compromised quadrant.

This concept is for keeping your guard. Think of each of your legs as the barrels of a double barreled shotgun. When you shoot one of the barrels this is when you extend one of your legs out. Now in this concept you never want to have shot both barrels at the same time, that is you never want to extend both of your legs at once. You always want to have one bullet in the chamber so that even if one of your legs is extended you want your other leg with your knee to your chest so that it can protect you from having your guard passed.

Consider your limbs as chains that start at your torso and end at the end of your limbs. Your chains are vulnerable from being attacked when they are opened. Open is when they are not attached to the floor, holding into something or hidden away.

With leglocks your foot is the end of the chain. So a common leglock escape would be to clear your hip and put all your weight on your foot so that it connects to the floor . This is closing the chain of your legs by connecting your foot to the floor.

If you are passing someones guard it is helpful to make yourself feel as heavy as possible to your opponent. This is done by removing the opponents leverage points or levers so that they are not leveraging any part of your body and instead are carrying all of your weight. An example of this would be when in butterfly guard pinning both the opponents legs together so that the butterfly guards lever is removed.

Consider your spine and when it is in a neutral position it is at its strongest. But if it is twisted, bent or kinked it instantly weakens your entire structure. Always be looking to put a kink in your opponents spine or torque it in some way to weaken their entire structure. Conversely when defending you want to keep your spine in the neutral position the entire time to retain your strength. For instance moving your opponents hips one way but keeping their upper body pinne or even moving their jaw / head in the opposite direction.By torqing the spine by attacking and twisting the jaw you will even weaken your opponents legs.

If you find yourself in a stalemate with your opponent consider  their spine, is it in a neutral position ? Or could you torque it by moving their hips or jaw. And conversely consider your spines position and make sure it is neutral to generate the maximum amount of leverage.

For when certain moves only work on certain body types. For instance if you are against a taller opponent playing spider guard will be really difficult as they can create a lot of slack in their arms by simply standing . For a tall opponent you want to use a short range guard not a long range guard as you want to neutralise the advantage of height that your opponent may have. Conversely If you are taller use a long range guard.

The same principle applies when passing. If you are going against a taller opponent you will have to pass by keeping close to their body or by using a half guard pass so that they cannot use the full length of their limbs.

Even when on mount this would be pulling the opponents elbows away from their body / border so that they become compromised.

When passing the guard or sweeping you can accidently telegraph your move, consider this as loading up your punches or pulling back before you punch.

For example when attempting a pass when you would push your opponents legs in and then pull them out to pass the legs. You do not want to push the legs in suddenly as this is the telegraph to your opponent. Instead you would load the spring by driving your pressure in slowly until you feel your opponent start to push away and you would then pull their legs out.
If any movement involves a push / pull motion then loading the spring is not exploding into the push pull which would telegraph your intentions. But rather slowly forcing your opponent into the position where you would have pushed them (this would be when the spring is loaded) and then executing the pull.

Using a part of your anatomy that you throw through space that creates a pendulum effect to move the rest of your body.

For example when laying flat and looking to sit up you would not just raise your shoulders up , instead you would raise your legs to the sky and then throw them down towards the ground. THis would create the pendulum effect that would lift your shoulders.

With these three setups in mind you can rotate between them as the counters from one posture and take down will usually lead them into one of the other postures.

Like Judo whoever gets the dominant grips will most likely win. Misdirection is to get the grips you want without telegraphing your intention. If you want to grab their feet you do not want to look at there feet and move directly to grab them as it will be obvious to your opponent. instead want to see where your opponent is looking or paying attention to and use movement to misdirect them away from where you are looking to grip. This may be looking at their legs and grabbing the lapel instead and not easily telegraphing your intention to your opponent.